Having already noted the theology in both Proverbs and Sirach which depicts the personified Lady Wisdom as embodied in human figures (i.e., the ideal wife and Simon the High Priest), I have observed the same trend within the Gospel of John. In fact, the connections between Jewish literature describing Lady Wisdom and Jesus within John are far greater in number than the connections in Proverbs and Sirach (and I might not have even found all of them).

The primary conclusion of this evidence suggests that if the Gospel of John repeatedly depicted Jesus Christ as the embodiment and incarnation of Lady Wisdom, which itself is a personification rather than a literal person alongside Yahweh, then this is a strong indicator that the Fourth Gospel is not thinking in terms of Jesus consciously existing prior to his birth. Furthermore, if Logos and Wisdom were understood as synonymous terms (as Wis 9:1-2 suggests), then the theology of Jesus as the incarnation of Lady Wisdom needs to be read in conjunction with the prologue (John 1:1-18).

The new episode of the weekly podcast Honest Theology is now available for viewing. This week’s episode contains:

-a devotion in Isa 2:22 regarding the pitfalls of regarding too highly celebrity preachers/theologians

-a demonstration of how to do a word study by examining the semantic field of a given word (in this case, ‘morphe’ from Phil 2:6-7)

-suggestions of honest commentaries for the Gospel of Luke

Hope you enjoy the show!

As a follow up to last week’s video on the Incarnation of Lady Wisdom in the Ideal Woman of Proverbs 31, I have set forth data which I feel points to the conclusion that the Book of Sirach also depicts a human being as the embodiment of God’s personified wise interaction with creation. In short, Sirach 24 offers a picture of Lady Wisdom in rich poetry, and that poetry is used later in the same book to describe the historical High Priest Simon, using the same Greek words in the process! Furthermore, I note how the language of Sirach was picked up by the Prologue of John in order to depict Jesus in the same terms and theology. Since Lady Wisdom is a clear personification (rather than a actual person alongside Yahweh), then this example in Sirach sheds some much needed light on how John 1:1-14 should be responsibly interpreted.

Let me know what you think in the comments below.

Here is the link to the second episode of Honest Theology, the weekly show aimed at helping you interpret the Bible with honesty and truthfulness. This week, we discuss the genre of the four biblical Gospels as closely identified with ancient Greco-Roman biographies. After discussing the information regarding Gospel genre, we recommend a few critical commentaries on the Gospel of Mark, stopping to read a great quote on Mark 13:32. From there, we move onto our ongoing exegesis of the Book of Revelation by examining the episolary introductions to the book in Rev 1:4-6, highlighting there some extremely important nuggets of truth within the text.

Let me know what you think of the show.

Here is a short 8 minute video where I show exactly how Jesus refuted the misunderstood notion that he was coequal with God the Father.

Let me know in the comments below what you think of these texts.

I am experimenting with my new screen capture program and thought I would make a short video on 1 Cor 10:4. In this short clip I demonstrate that Paul was interacting with many Jewish interpreters of his day regarding the identification of the rock which provided water to the Israelites during the Exodus wilderness trek. If Paul regards Jesus precisely as the true embodiment of Lady Wisdom (i.e., God’s personified wise interaction with the world) then Paul can typologically label that rock as “Christ.” This would sugggest that 1 Cor 10:4 was never intended by Paul to refer to Christ as a physically preexistent person.

Let me know in the comments below what you think of this interpretation.

Here are the lectures on the somewhat unknown epistle of Jude. In the introductory issues I wrestle with the problem of authorship, its relationship with 2 Peter, date, and the intended recipients. I draw heavily on Philip Harland’s Associations, Synagogues, and Congregations which allowed me to realize that Jude was writing to communities which either viewed themselves or others viewed them as Greco-Roman associations. I introduce my students to these ancient associations and suggest they are key to understanding the particularly heated and selective language used by Jude in this letter.

Let me know in the comments below what you think of reading the epistle of Jude in light of ancient associations.

Critical Introduction to Jude – part one

Exegesis of Jude – part one

If I had to guess I would say that you have not heard very many sermons coming out of the small epistle of 3 John. Many have a hard time understanding what is taking place with this letter and what were the social issues precipitating its composition. Fear no further, for I offer here three videos dealing with critical aspects of 3 John, its social situation, and its application for the Church today.

Let me know in the comments below what you make of the message of 3 John.

Introduction to 3 John – part one

Here are the video lectures critically introducing 2 John and commenting on each of its verses. I find this epistle significant because it was written precisely to highlight the christological humanity of Jesus as a critical Christian doctrine. Failure to confess the human Jesus was akin to labels of “antichrist.” Our class also wrestles with how the honor the command to refuse hospitality to those who do not honor this teaching (according to 2 John 10). Tough issues for sure.

Let me know what you think of 2 John and its unique message.

Exposition of 2 John part one

I got a lot of good feedback on yesterday’s post in which I critically introduced 1 John. Here are the videos on the contents of 1 John taught against the backdrop of the introductory material covered yesterday. I focus at the end on practical applications which the wider Church can take from this document.

Let me know what you think of the exegesis.

I do not know about you, but when I used to read 1 John as a teenager I felt that there was a disconnect between the author and myself. It was as if I did not quite fit into his social world, as if I were missing a large piece of the puzzle. Thankfully I now have the benefit of modern scholarship on the Johannine literature so as to fill in that large puzzle piece, thus making it possible to responsibly reconstruct the social setting of 1 John and thereby read the document with greater understanding.

In these three videos I outline the social situation which precipitated the writing of 1 John. I also wrestle with critical issues, particularly regarding what sort of document 1 John is and who wrote it. I also attempt to tackle the interesting issue regarding 1 John’s relationship with 2 John, 3 John, and the Gospel of John (which I regard as having experienced a final form of revising at the hand of the author of 1 John).

Let me know in the comments below what you make of the critical issues surrounding 1 John.

Here are some short lectures on the epistle to the Ephesians. I take time to wrestle with the fact that Ephesians was not likely not originally penned to the city of Ephesus in addition to using the epistle to the Colossians as a literary source. This latter point, of course, directly influences the issue of Pauline authorship (which I also explore). Furthermore, Ephesians is the only epistle in the New Testament where there is no crisis being solved by the author!

Let me know in the comments below how you personally wrestle with these difficult and critical issues.

Ephesians chapters one through three

Here are my short lectures discussing Paul’s epistle to the Colossians. I take some time to address the issue of authorship, the likely Jewish identity of the opponents, and I even deal with the christological hymn in chapter one. I am convinced that Paul regards Jesus as the embodiment of God’s personified wisdom, being God’s wise ordering and interaction with his creation. Let me know in the comments what you think about Jesus being the embodiment of God’s wisdom.

Colossians chapters one and two

In today’s lecture we will be looking at the short (but very important) epistle to Philemon. I encourage you to look more closely and more critically at this oft-neglected letter. Perhaps you might find a message bigger than the letter’s size might initially suggest.

In my exegesis I challenge the popular reconstruction which states that Onesimus was a fugitive who stole from Philemon. Let me know if my reconstruction is persuasive.

Today’s lectures are on the epistle to the Philippians. Special attention is given to the christological hymn in 2:6-11, particularly in how it fits into Paul’s overall ethical argument exhibited throughout the letter.

Here are my short lectures on the Epistle to the Galatians. I discuss issues involving the New Perspective on Paul, the famous 4QMMT document, the important phrase “works of the law,” the relationship between the imperial cult and the church in Galatia, and what Paul likely meant by his “faith of Jesus” phrase in Gal 2:16.

Today’s short videos are on 2 Thessalonians. These build on top of the videos regarding 1 Thessalonians which I posted yesterday. I give some meaningful attention to the issue of contested authorship as well as what I think 2 Thes 2:1-12 is all about. Feel free to share them with others if you think they might find them useful.

In continuation with my recent posts I am providing a few brief videos which offer an introduction and summary of the contents of Paul’s epistles. Today we will look at what is likely the first Christian document written by Paul – 1 Thessalonians. 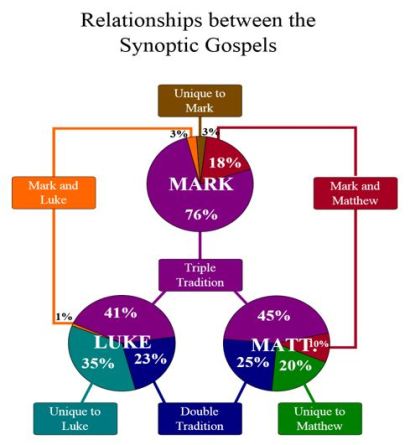 Here is the link to an older class (Fall of 2014) I taught on the Synoptic Gospels of Matthew, Mark, and Luke. I introduce to the students the Synoptic Problem and the Q document on the first day and use the Two-Source Hypothesis as the basis of my examination of these three New Testament documents. Furthermore, I am influenced by the scholarship of James Dunn in regard to the oral Jesus traditions and how they took their form and shape within a predominantly oral culture.

I hope you enjoy these lectures!

PS: the final lecture was lost in production, so I apologize in advance for that.

I want to keep sharing my lectures for the public. I recently gave four weeks worth of lectures on the Book of Hebrews in a junior level undergraduate Bible course, totaling something like six hours of material.

We begin by examining introductory critical issues and then move into the exegesis of the document. Critical attention is given to christological issues involving Hebrews, passages which have troubled Christians for a long time. The course also gave attention to modern theological reflection and practical applications.

The link below will take you to a YouTube playlist possessing all of the video lectures.

Join 222 other subscribers
Follow The Dustin Martyr Blog on WordPress.com